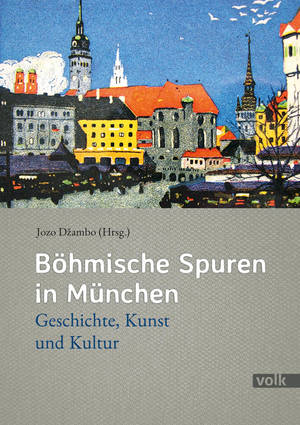 Munich was for many decades and still is a magnet for people from the neighbouring Czech lands. The traces that these connections have left in the city are diverse, although the close proximity also has its pitfalls: the juxtaposition of Bavarian and Bohemian culture is often taken for granted and almost ignored. It is therefore all the more worthwhile to track down the mutual influences and to search for traces even in remote corners of the city.History and the present are equally represented in 16 contributions: Events such as the Munich Agreement, personalities such as Franz Kafka, Alfred Kubin, Max Mannheimer or Jaromir Konecny, institutions such as the Sudeten-German House or the Ackermann Community are considered, as well as interaction in the field of literature, art, music, architecture or the numerous street names that recall the very special Bavarian-Bohemian relationship.

Order at the publisher or in bookstores. 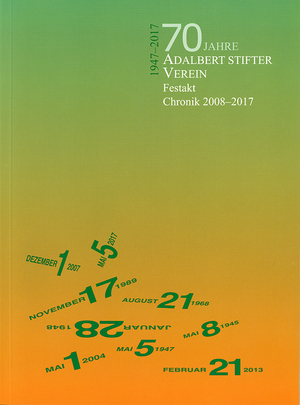 The Adalbert Stifter Association celebrated its 70th birthday in 2017. The commemorative publication of the ceremony in the Bavarian state parliament held on the occasion of the anniversary offers a chronicle of all events and activities of the association from 2008 to 2017. 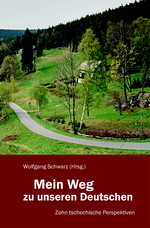 My Path to our Germans

“Our Germans” is what the Czechs call the Sudeten-Germans. For a long time, the two groups lived alongside each other in peace. Nazi-terror, the expulsion and communist ideology brought this cohabitation to a brutal end. After the war, the communist regime sweepingly demonized all Sudeten-Germans as revanchists. On the Sudeten-German side people often focused only on their own suffering.What personal experience do Czech writers, intellectuals and artists associate with their former fellow citizens, and with Germans in general? Between 2016 and 2018 at a series of lectures in Munich ten famous writers talked about their experiences and perceptions of Germans and talked about the expulsion of Sudeten-Germans that began in 1945.With contributions from Radka Denemarková, Magdalena Jetelová, Tomáš Kafka, Jiří Padevět, Lída Rakušanová, Jaroslav Rudiš, Erik Tabery, Mark Ther, Kateřina Tučková und Milan Uhde.

Sponsored by the Czech-German Future Fund 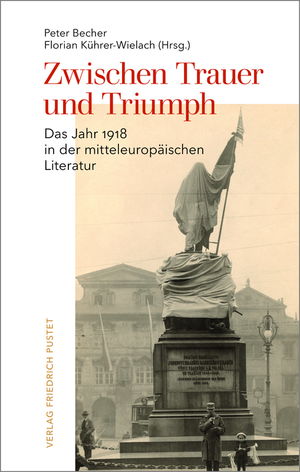 Between Grief and Triumph

The year 1918 in central-European literature

The topic of the end of the First World War was explored in many different ways in central and southern European literature, regret at the fall of the Habsburg Monarchy as well as joy at the founding of the new successor-states. For German-speaking readers, authors such as Robert Musil, Joseph Roth und Franz Werfel became well-known. But these only represent a small portion of central European literature. Polish, Czech, Ukrainian, Hungarian, Romanian, Bosnian, Croatian and Slovenian Authors and representatives of Jewish, German-Bohemian, Hungarian-German and Romanian-German Literature – all of these contributed (with their novels, stories and memoirs) to create a many-sided and rich picture of the year 1918 and its historical context.

Order at the publisher or in bookshops. 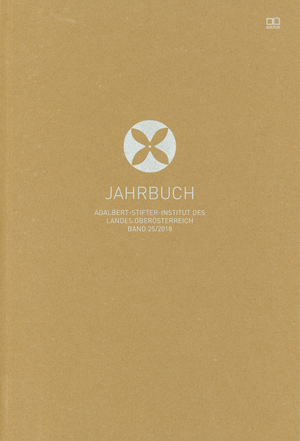 The Yearbook of the Adalbert Stifter Association Linz 2018 contains contributions from conferences on Stifter both in Vienna and Linz (2016 and 2017) and on the world the writer lived in: literary historians, educational researchers, and art and music historians analyse and document the social environment during the period of Stifter’s studies in Vienna and his working years in Linz. 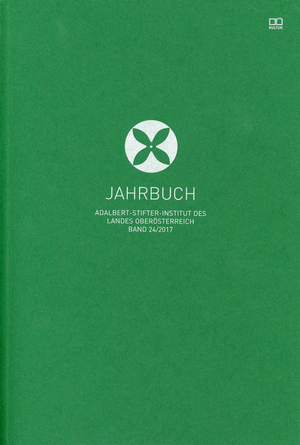 The Yearbook of the Adalbert Stifter Association Linz 2018 contains contributions from conferences on Stifter in Oberplan/Horní Planá and Kremsmünster (2014 and 2015) and on the world the writer lived in: literary historians, experts on forest environments, educational researchers and scientists analyse and document the environment of Stifter’s childhood and youth in South Bohemia, as well as his educational environment in Kremsminster, which influenced his career. 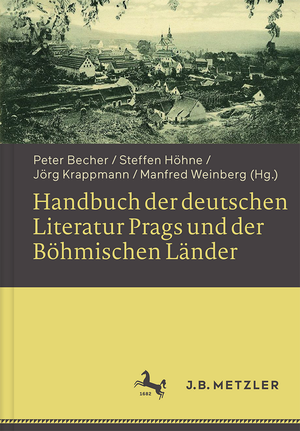 to German literature in Prague and the Czech lands

The guide gives a comprehensive overview of literature in this part of Central Europe and its development since the Enlightenment. At the same time the prevailing idea of a division between Prague and so-called Sudeten-German literature is challenged. At the centre stands the transcultural and transregional relocation of German-language literature of the Czech lands into the complex field of German, Jewish, Czech and Austrian literature and culture.

Order at the publisher or in bookshops 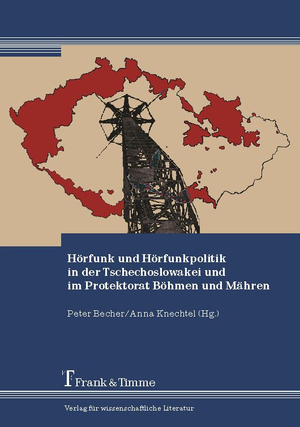 Radio and the Politics of Radio

in Czechoslovakia and in the Protectorate of Bohemia and Moravia

The first programmes of Czechoslovak radio were greeted with great enthusiasm. Only limited broadcasting time was devoted to German, the mother tongue of around three million citizens, which is why many of them listened to the German Reichsfunk. The authors of this volume introduce us to the beginnings of Czechoslovak radio, the evolution of its German-language programme, the construction of the Mělník transmitter, the work of the German-language foreign broadcasts and of radio during the Protectorate. They analyse the political instrumentalization of the young medium of radio through propaganda and counterpropaganda from the Czechoslovak, German and Allied sides and discuss the arising conflicts. 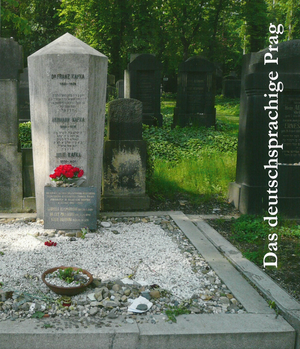 For several years (2008–2011), students from the Na Zatlance Grammar School in Prague worked on the “German-speaking Prague” project. They created texts about the everyday life of Prague Germans as well as their organizations and culture. In 2014 the Czech volume “Německy mluvící Praha” was completed in cooperation with the Franz Kafka publishing house in Prague, funded by the Adalbert Stifter Association’s cultural manager for the Czech Lands. In 2016, the German translation was published with historic and up-to-date photographs, making it possible to follow in the footsteps of Prague Germans. 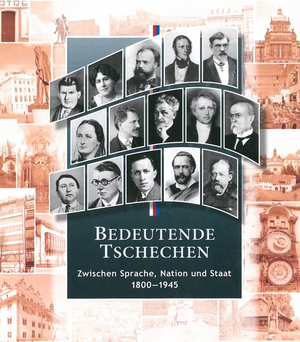 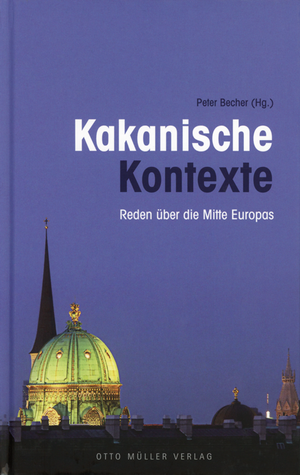 Speeches about the Middle of Europe

The Habsburg monarchy triggered very contradictory reactions after its fall. Total rejection as well as the deep regret, often accompanied by a fair bit of nostalgia. A hundred years after its downfall, the “Kakania”, as Robert Musil ironically called the Austro-Hungarian Monarchy, has once again become the subject of reflection: in 1914 the Austrian heir to the throne Franz Ferdinand was assassinated in Sarajevo, in 1918 the First World War ended with the collapse of the monarchy. In what contexts is the atmosphere during the Habsburg Monarchy seen today? What are its resonances in Central Europe a hundred years on, as seen by such intellectuals as Karl-Markus Gauß from Salzburg, Dževad Karahasan from Sarajevo or György Konrád from Budapest? The articles in this volume, which is based on a series of lectures by the Munich Adalbert Stifter Association, address these questions. 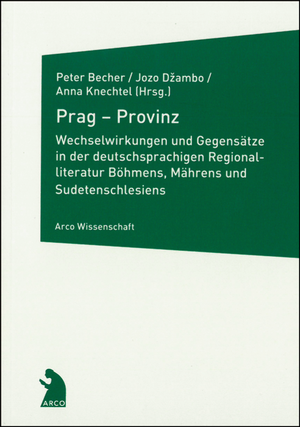 Interaction and difference in the regional German-language literatures of Bohemia, Moravia and Sudeten Silesia

The contributions collected in this book question the often-mentioned contrast between Prague and the provinces. Based on a regional perspective on literary studies, this opposition is replaced by a more nuanced representation that understands the German-language literature of Prague and province as part of the regional literatures of Bohemia, Moravia and Sudeten Silesia. Regional literature that can be described as an ever-changing process of polarization and separation, of communication and integration. In this way, the "provincial" in Prague and the "cosmopolitan" in provincial literature are uncovered, and a variety of interactions become apparent in terms of writers’ biographies and the themes about which they write. 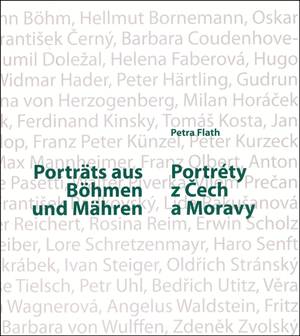 Portraits from Bohemia and Moravia

The catalogue to the exhibition of the same name with photographs by Petra Flath. 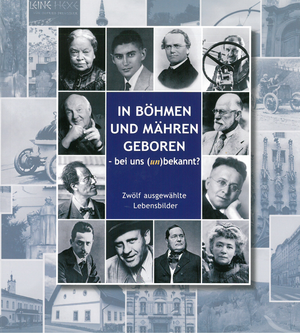 Born in Bohemia and Moravia – (un)known to us?