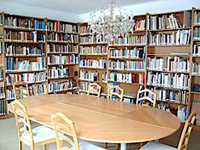 The library of the Adalbert Stifter Association is part of the scientific library in the Sudeten German House and thus part of the largest special collection on the history of the Czech Lands, Czechoslovakia, as well as the Czech Republic and Slovakia in Germany. It is managed by the Collegium Carolinum and is located in the basement of the Sudeten German House. Moreover, over 6,000 volumes are available on the third floor of the house: the work of German and Czech speaking writers from the Czech Lands, works on literature, exhibition catalogues, books on art as well as literature on cultural and art history.

Search in the online catalogue of the library.

The focus of the collection

The library contains large collections from the 19th century: scientific descriptions of art and cultural monuments, arranged according to political districts (Czech or German), supplementing the well-known collection The Austro-Hungarian Monarchy in Texts and Pictures; the equally elaborate volumes Čechy with illustrations by Karel Liebscher, arranged by region; the topographical works of Jaroslav Schaller (Bohemia) and Gregor Wolny (Moravia), as well as early descriptions of Prague. The encyclopaedia Ottův slovník naučný from 1896 with its supplementary volumes from 1930 and the Story of Bohemia by František Palacký in German are also part of the collection.

One focus of the collection is on the editions of Adalbert Stifter's works: In addition to the (not yet completed) Historically-Critical Edition of the Works and Letters, you will also find the Prag-Reichenberger Stifter edition in reprint as well as research literature on Adalbert Stifter.