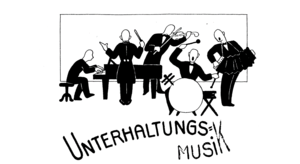 Posters from the Terezín Ghetto

The exhibition displays posters made by prisoners of the so-called Terezín Ghetto, which was in reality a concentration camp, inviting people to operas, cabarets, classical and modern concerts, choir concerts and academic talks. Although they languished in inhumane conditions and although their situation was without hope, the prisoners found time and strength to get involved in cultural activities. In this way, face to face with death, they showed their protest against dehumanisation.  For the first time posters in German from the so-called Herman Collection of Terezín could be exhibited, with the help of the historian Dr. Rudolf Wlaschek, Mönchengladbach. 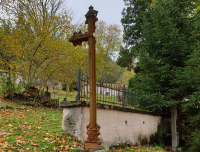 Faded But Not Gone

A search for clues in the Bohemian Forest

These days relations between Germany and the Czech Republic are well set for the future. Yet their shared past was not free from conflict. Since 2017 a research team from institutions at the Universities of Regensburg, Passau, Prague and Ústí nad Labem, as well as the Cultural Manager for the Czech Lands for the Adalbert Stifter Association, have been working, with junior researchers in mind, on the topic of border/s between the Czech Republic and Bavaria in the context of a national and transnational culture of remembrance.

With this in mind, in October 2019 an excursion of students from the above-mentioned universities followed in the footsteps of the former German-speaking population of the Bohemian Forest. The participants each chose one of three photographs and wrote texts to accompany them. The bilingual German-Czech Exhibition, which is also available in digital format, shows old cemeteries, churches, remains of disappeared villages and newly established museums. It carefully transports us into a world of the past.

The exhibition was sponsored by the Bavarian-Czech Academic Agency.